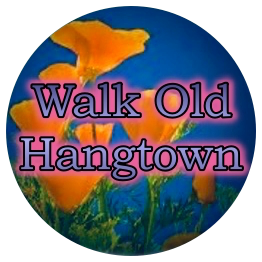 A Walk With Marilyn Ferguson

Our History for "Walk Old Hangtown" was taken from the first “Walking Tour of Historic Placerville” © 1973 by: Jane Schlappi and Marilyn Ferguson

For the History Buff by Marilyn Ferguson

Marilyn at Work * The Fountain & Tallman Museum, "The Biggest Little Museum in the West" built in 1852 * Photo by Wendy Shultz, Mountain Democrat

#4 (Hardware Building and the Mountain Democrat Newspaper Building) 441 Main Street. Both Built in 1857.

#7  Built in 1898, the tower is the third to stand on this site.  Placed in the center of town to sound the terrible alarm of "FIRE" and to call to battle the volunteer firemen, the tower is a unique landmark of Placerville.

#14.  Corner of Main Street and Cedar Ravine.  Erected in 1926 as a memorial to Frederick Sieg who was the founder of California's Grove #1 of the Druid Lodge in Placerville.

Placerville “A Village of Gold” From Sesquicentennial Book

"A VILLAGE OF GOLD"

Since the first deposits of placer gold were found on the banks of Hangtown Creek in 1848, Placerville has been the center of activity in the region of California known as the "Central Mines."  Men from every part of the world flocked to Placerville; Georgians, Chileans and Sonorans were the first miners who came with knowledge of mining methods.  Great gold deposits were mined and some 49'ers returned home rich, while others stated to become the founding fathers of the town; others died alone and penniless, lost to their loved ones.

In 1850, the village was officially called Placerville in remembrance of the huge placer gold deposits found here.  Incorporation came in May of 1854.  In five short years, Placerville had grown from a mining camp, to a village, to a city.  In 1857, Placerville, by popular vote, became the county seat.

Placerville earned the nickname of "Hangtown" when in 1849 a big oak tree in the middle of the camp was used to mete out quick justice to wrongdoers.  The nick name stuck and persists to this day, to the pleasure of some and the displeasure of others.

The strategic location on the early emigrant route made Placerville an important supply center. In 1859 when the great Nevada silver deposits of the Comstock Lode were discovered, long line of supply wagons threaded their way east over the Sierras, carrying needed provisions, and returned with the rich ore from the mines heading for the Mint in San Francisco.

Located at the intersection of State Highway 50 and State Route 49, modern Main Street shows a busy, growing town.  But under the layers of facade, stand rhyolite stone buildings (c. 1853-1858), reminders of the citizens who, by their enterprise and hard work, left us the legacy of a permanent city.

The Placerville Sesquicentennial Book: A Walk in the Garden © 2007 by: Marilyn Ferguson and Josette Johnson of Gardens & Points of Historical Interest

In honor of our sesquicentennial celebrating Placerville's 150 year golden past we published this book © 2007. Free to download here this walking tour shows the historic significance of our old maps, landmarks, historic Main Street history & village of gold by Marilyn Ferguson and garden projects photos by Josette Johnson.

First published in 2007 see our "A Walk in the Garden" celebrating Placerville's 150 year golden past. (pdf)Download

Wildflowers we seeded along the Scenic Corridor of Hwy 50.

The Golden State of California

The State flower is the California Golden Poppy *  Placerville Gold Country * A link in the chain of gold Rush towns along the Golden Highway of Route 49 and El Dorado Highway 50 in the scenic corridor Of the Mother Lode.

"Volunteers are the Flowers of Placerville." ~ Marilyn Ferguson (with Suzy & Josette) planting poppy seeds near Bedford Avenue across the creek from where our tour begins at Old City Hall.

Thanks for visiting & Planting your flag @ Walk Old Hangtown

Welcome, we hope you find what you're looking for, Fergie.